The Petroleum Industry, A Nontechnical Guide


The Petroleum Industry, A Nontechnical Guide
Petroleum industry is a main energy industry. It has a huge chain of value from upstream to the downstream industries, such as oil exploration, oil extraction from wellhead, storage, measurement, transportation, refinery, petrochemical and chemicals. Since the industry is all about dealing with various hydrocarbon products, “hydrocarbon industry” is another name for the industry.

Crude oil from the field reservoir usually has gas, water, and sediment in it. They are highly variable, with no two exactly alike. One crude may be bright green in colour, sweet smelling and as fluid as water. Another may be jet black and have an unpleasant sulfurous smell. Yet another may be pink and stack up in a pile when poured on the ground on a hot day. At the other extreme, gas condensate is colourless and will completely evaporate if left uncontained. The specific characteristics of each crude reflects its unique blend of sizes and types of hydrocarbon molecules, with thousands of different compounds in the mixture.

This extreme varability is why the material was named “crude”. It is indeed a crude material, being messy, unstable and dangerous to handle. Essentially unstable in its initial form, crude must be refined – broken down – into products with the specific characteristics to handle certain jobs well, e. g., gasoline and diesel to power engines, fuel oil to heat homes, etc. This is the role of refineries.

Very little of the crude is produced by refiner own company. Instead, it is generally purchased on the open market. The industry has a very efficient market operating between production and refining. Producers can count on getting a good price for their crude anywhere in the world and refiners can count on being able to purchase feedstock at a good price. Crude is traded freely, often changing hands several times as it takes the most efficient route between the producing fields and the refinery.

Crude oil can be transported from the producing field to the refinery in a variety of conveyances. For onshore production, tank trucks, railroad tank cars, and barges on inland waterways are used to some extent, but pipelines are the dominant mode of transportation. Pipelines are also used to bring production ashore from offshore fields located reasonably near to land.

For most export operations around the world, marine tankers are the only choice available. The bulk of the enormous Middle East production, for example, is shipped to all parts of the world in tankers.

Most of the water and sediment have to be removed before the crude can be sold to a shipper. Also, gas and oil must be separated from each other. Therefore, surface processing facilities with separation, measurement and storage are built close to the oil field. Also, there are special vessels called separators and treaters being employed to separate fluids and to remove emulsified water from oil. 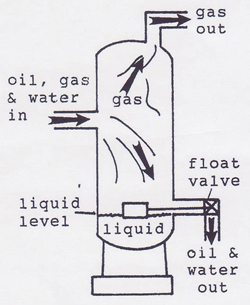 Separate the produced fluids into stremas of oil, gas and water for sale and disposal

Remove free-water from the well by knockouts 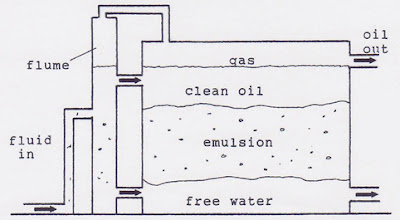 Emulsion, a mixture of water and oil, to be separated by wash tank with flume

Refineries
Crude oil cannot be used as a fuel itself, because it contains such a broad spectrum of molecular size. To be practical as a fuel, a material must have known burning characteristics so that it can be matched with an appropriate burner system (engine, boiler, etc.).

The first step in a refinery is to split crude into several fractions or "cuts" – to cut the large molecules of the crude into smaller various hydrocarbon products. Each cut is concentrating a particular range of molecular sizes. For example, one of the cuts might be light gases described as "butanes and lighter"; a heavier cut might be kerosene. The cuts are made with a distillation process that employs selective vaporization and recondensation.

The highest valued petroleum products are the "white products", which include gasoline, diesel, jet fuel, and heating oil. Production of these "middle of the barrel" products, particularly gasoline, is maximized by converting as much as possible of the lesser-valued gases and the heavier "bottom of the barrel" materials to white products. This is done by altering the molecules as follows:

The processes employed to “cut” or refine the crude include atmospheric distillation, vacuum flashing, thermal cracking, cat cracking, hydrocracking, gas plant, alkylation, catalytic reforming and blending. Roughly, these are chain of process, meaning the yield of the previous process becomes the feedstock of the next process, with distillation being the initial process and blending the final one.

Distillation
To understand how the atmospheric distillation tower works, let’s use tap water being boiled (vaporized), then cooled so that it recondenses. This process creates distilled water, which is purer than the original water because only the H20 molecules vaporized and left the vessel. The various non–volatile impurities in the tap water remain behind, building up in concentration, and eventually precipitating out as a solid residue when the vessel boils dry. This process functions then to separate the water from the impurities.

In the above example, water is boiled at 100°C (at sea level). The 100°C is called water's boiling point and is specific to the water molecule. Each of the hydrocarbon molecules has its specific boiling point, with the smaller the molecule, the lower its boiling point. This is the key to cutting crude in a distillation tower.

Atmospheric distillation is the initial process in a refinery. Its fractionating tower - a large diameter vertical vessel with multiple internal contactor trays - is the largest in the refinery. The crude is heated, vaporizing most of it, then injected into the base of the tower. Vapors rising through ports in the trays come into contact with condensed liquids working downward through the column. This interchange continually vaporizes some liquid and condenses some gas, establishing an equilibrium throughout the column with heavier material toward the base and lighter material toward the top. Product cuts are continuously removed from the tower through side draws spaced along its vertical length. The location of each side draw is designed to tap a specific boiling point range of material. 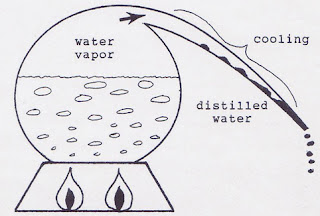 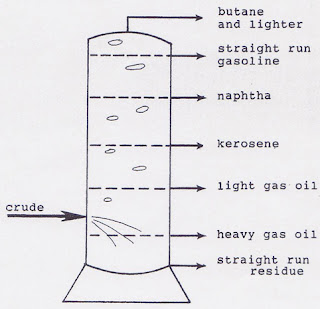 Blending
Blending operations are the final step, combining the various outputs of all the processes into the final products that are sold. The blending operation has a major impact on managing the refinery. It determines what feedstocks and run volumes are needed so each of the various processes will yield the required volumes and specifications of products, such as gasoline, diesel fuel and furnace oil. The heavy, black, bottom-of-the-barrel residual remaining after processing can be sold as asphalt or blended with lighter materials and sold as "resid" (residual fuel oil).

Petrochemicals
Petrochemicals are non-fuel compounds derived from crude oil and natural gas. The industry has been built on the extreme reactivity of the carbon atom. The feedstocks for petrochemical plants are provided largely by refineries and include gases, naphtha, kerosene, and light gas oil. Natural gas processing plants are also a source of feedstock, providing natural gas, ethane and LPG (liquefied petroleum gas).

Petrochemical plants are typically built adjacent to refineries to be near their source of feedstock. Also, there often are byproduct streams created in the plants that can best be utilized by returning them to the refinery for processing. In fact, the boundary between the two types of plant often becomes blurred as progressive integration of both fluid streams and operating personnel takes place for increased efficiency. As a result, several very large refining/petrochemical complexes have developed around the world.

Petrochemical processes are, in general, much smaller than refinery processes, but there are exceptions like very large ethylene plants. The same tools are used as in refining - heat, pressure and catalysts - but, unlike refineries, inorganic chemicals are used in some of the reactions.

It's not hard to visualize a future where crude oil and natural gas could become in such short supply that burning hydrocarbons as fuel would no longer make sense. However, it would still make sense to manufacture petrochemicals because they extract such incredible value from the hydrocarbon molecule.
Process Tool

Whether crude refining or petrochemical processes, the tools used are the same. They are:
• Heat (distillation): to excite the molecules
• Pressure: to retard vaporization
• Catalyst: to assist the reaction but not participate in it
References

The above stuff is the excerpt from “The Petroleum Industry, A Nontechnical Guide” by Charles F. Conaway, Tulsa, Oklahoma Publisher. 1999.


Equipment
The followings are common equipment found in the oil and gas plant.
• Absorber: Collector that actively absorbs the light rays
• Boiler: Provide steam heat
• Compressors: Compressors do the same for gas streams as pumps do for liquids – creating a pressure differential that moves the gas through the system. It is used to inject low-pressure associated gas into high-pressure pipelines.
• Columns: For distillation
• Deaerator: To remove air
• Drum: A cylindrical metal container for storage of liquids
• Furnace: Provide heat for cracking
• Meters: Monitoring and control meters sense flow rates and pressures in vessels and piping, alert the operator or automatically take the needed action.
• Nozzle: Exhaust duct to control fluid flow exit from an enclosed vessel
• Pipeline: Pipelines transport for both gas and liquids. They provide the conduits for transporting produced fluids to and through the facility. They are constructed by welding together joints of steel pipe. Most pipelines are externally painted and insulated for protection from corrosion and abrasion.
• Piperack: Support pipelines
• Pressure vessels: The large cylindrical pressure vessels seen in every producing facility are essentially enlarged sections of a pipeline. The enlargement allows fluid velocity to slow, providing the retention time necessary for the fluids to gravity-segregate. Gravity segregation is the primary mechanism used to separate oil, water and gas.
• Pumps: Pumps pressurize liquids, creating a pressure differential that moves liquids through the system from lower level to the higher level.
• Reactors: A device used to force a controlled reaction with a given substance. The most common reactor is an ozone reactor, which forces water through a pressurized column of an air-ozone mixture
• Tanks: Tanks are large vessels used for volume storage of oil or water or to provide retention time for gravity segregation. Although storage tanks are not constructed to contain pressure, a few ounces of gas pressure is normally maintained to exclude air.
• Tower: Same as column
• Valves: They either blocking (open or closed) or control (throttling).
Diposkan oleh sudarmanto di 08.54

Link to other my web and radio